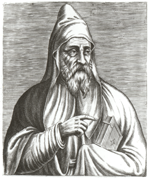 Jerome, or Eusebius Hieronymus as he is sometimes known, was born at Stridon in Dalmatia. His home town was destroyed by the Goths in 379 and thereafter ceased to exist making it impossible to locate today.[1] We know few details about his parents, except that they were both Christians and that his father, Eusebius, was a well-to-do local landowner.[2] After completing his elementary education at a local school Jerome was sent to a school in Rome, where he received what at the time was considered an excellent classical education.[3] It is probable that by the time he left school he was fluent in Latin and knew a little Greek.[4] Jerome is remembered primarily for his translation of the Bible into Latin under the patronage of Damasus (304-384), the bishop of Rome (366-384). Jerome's knowledge of Hebrew and extensive classical education made him the ideal man for the task. His translation, which was in a Latin style used by the common people, became known as the Vulgate, the standard text of the Roman Catholic church until the Second Vatican Council (1962-65).[5] Jerome's version superseded the fragmentary and generally poorly translated Latin versions then available,[6] but was not without its own shortcomings.[7]

Jerome also wrote extensively, producing commentaries on most of the books of the Bible, as well as works on monasticism and treatises against various heresies. Although his background knowledge and linguistic ability were excellent, his method of exegesis swung wildly between that of rabbinic Judaism, the literalism of Antioch and the allegorical interpretation of Alexandria. While the literal reading tends to dominate Jerome nowhere rejects the other two.[8] J.N.D. Kelly comments that Jerome's hermeneutic worked "on the principle that this allegorical or spiritual interpretation should only be developed after the direct, literal sense of Scripture has been established."[9] At least one scholar recognises a development in Jerome's hermeneutic through his lifetime: At first the Alexandrian method attracted him, especially the translation of Hebrew names as a basis for the spiritual interpretation. Then the Origenist controversy warned him off an exaggerated use of allegory, and his own studies in Hebrew increased his interest in the letter. His last commentary, on Jeremias, is purely literal.[10] When he was in his forties Jerome spent two or three years as a hermit in the Syrian desert, at which time he learned Hebrew and a little Syraic.[11] His idealised picture of monasticism was shattered by the malicious behaviour of his neighbours, so Jerome left the desert and shortly afterwards was ordained as a priest in Antioch.[12]

These bad experiences did not prevent Jerome from continually exhorting others to embrace a monastic lifestyle, or from later establishing his own monasteries at Bethlehem.[13] Asceticism had become a subject of controversy in Jerome's day. There was a growing alarm among ordinary Western Christians that an ascetic lifestyle was becoming a requirement of true Christianity.[14] Some attempted to challenge the teachings of the church hierarchy, arguing from Scripture that marriage was instituted and blessed by God and was not defiling. The behaviour of many of the monks was ample proof to many that their lifestyle did not end their love of sinning (cf. Col. 2:20-23). Jerome's scathing responses resulted in him becoming extremely unpopular.[15] Nevertheless, his views became those of the Roman Catholic church down to the Renaissance.[16]