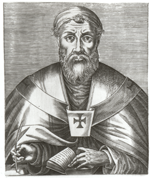 Born the son of Aurelius Ambrosius, the imperial viceroy of Gaul,[1] Ambrose followed in his father's footsteps and became governor of Aemilia-Liguria (Northern Italy) in AD 370. He might well have remained in a political career had not dramatic events overtaken him. Ambrose had his official residence in Milan, where he was a catechumen in the church. When the bishop of the city, a pro-Arian named Auxentius died, the election of a new bishop was hotly contested by the Arian and Nicene parties within the church. The contest became so violent that Governor Ambrose was summoned to the church where the election was taking place because of reports of a riot. The story goes on to tell how someone shouted out "Bishop Ambrose!" a cry that was taken up and resulted in his being elected bishop.[2] Being only a catechumen he was hurriedly rushed through the various church orders and was ordained only eight days later, on 7th December 373.[3] Whatever the reasons for his election Ambrose proved his determination to succeed in his new position. His training and particularly his knowledge of Greek[4] set him in good stead. He devoted himself to prayer and to the study of both the Scriptures and pagan literature, rapidly becoming an accomplished preacher and writer.[5] His was able to read the works of the eastern writers in their original language and he made use of Philo, Origen, Athanasius, Didymus the Blind, Cyril of Jerusalem, Basil of Caesarea, Hippolytus of Rome and the Neoplatonist, Plotinus.[6] Ambrose is credited as being chiefly responsible for the final defeat of Arianism within the Western church.[7] Familiarity with Greek also enabled Ambrose to introduce allegorical interpretation to the western church.[8] He was deeply influenced by Philo and Origen, seeing in Scripture three levels of meaning: the literal, the moral and the allegorical, but also making use of typology.[9] His hermeneutic was of great help to Augustine, who refers to Ambrose in his Confessions, in removing his objections to the Old Testament Scriptures.[10]

[1] F. Homes Dudden, The Life and Times of St. Ambrose, Vol. 1. (Oxford: Clarendon Press, 1935), 2: "From his palace at Trier he administered a region roughly equivalent to the modern countries of France, Spain, Portugal, part of Germany, and Britain together with the islands of Sardinia, Corsica and Sicily."

[2] The story passed into the folklore of the early church and so may well have been embellished. See W.H.C. Frend, The Rise of Christianity. (Philadelphia: Fortress Press, 1984), 645, n.10 for references.

[4] Which was becoming a rarity for western bishops by this time.