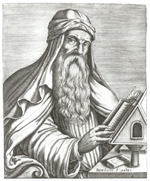 Basil was born in Caesarea, the capital of Cappadocia,[1] one of nine children.[2] His grandmother, Macrina, was converted through the ministry of Gregory the Wonderworker (a disciple of Origen), and two of his brothers (Gregory of Nyssa and Peter of Sebaste) also became bishops, and his sister (Macrina) a nun.[3] He received a Greek education at Caesarea, Constantinople and Athens,[4] studying the classics, astronomy, geometry, mathematics and medicine. Medicine seems to have held a special fascination for him, which has led some writers to claim that he actually practised it.[5] Basil never learned Latin - a fact deduced from the lack of Latin sources quoted in his writings.[6] Basil initially intended to take up a career as a lawyer when he returned from five years at the university in Athens in 355. Instead he turned to a life of asceticism, and together with his friend, Gregory of Nazianxus, founded a small monastic community.[7] In 360 he was ordained as a reader, in 362 as a presbyter, and in 370 as bishop of Caesarea.[8]

Many of Basil's writings have survived. Of particular interest is his work Hexameron or On the Six Days of the Creation, which was originally delivered as a series of nine sermons during lent. Basil's deep love for nature of evident throughout this work. He drew extensively from the works of the classical writers.[9] The most significant influence on his thinking was probably that of Aristotle. Basil maintained that he interpreted the Bible literally, rather than allegorically as Origen had done. Concerning that he wrote:

I know the laws of allegory, though less by myself than from the works of others. There are those, truly, who do not admit the common sense of the Scriptures, for whom water is not water, but some other nature, who see in a plant, in a fish, what their fancy wishes, who change the nature of reptiles and of wild beasts to suit their allegories, like the interpreters of dreams who explain visions in sleep to make them serve their own end.[10]

A good example of Basil's literalism is he refutation of Origen's identification of the waters mentioned in Genesis 1 with spiritual and incorporeal powers. He declares: "Let us reject these theories as dreams and old wives tales. Let us understand that by water, water is meant; for the dividing of the waters by the firmament let us accept the reason that has been given to us."[11] He was also careful to distinguish between literal statements and poetic imagery, such as "the heavens declare the glory of God" (Psalm 19:1), which did not imply to Basil that the heavens could speak.[12] His interpretation of Genesis is illustrated by examples from contemporary 'science',[13] which while often being remarkably accurate from our modern perspective also contained elements of folklore. Basil mocks and rejects the theories of the Greek Atomists, arguing that the Greek philosophers were wrong because they did not know the Creator:[14] "...these men, I say, have discovered all except one thing: the fact that God is the Creator of the universe, and the just judge who rewards all the actions of life according to their merit."[15] The influence of Platonism is evident when Basil equates Yahweh with the Demiurge.[16] Matter is created, because if it were uncreated it would mean that the universe is the result of the action of two beings, the one who made the matter and the one who shaped it.[17] God is both the Creator and the Demiurge (shaper) of the universe.[18] Before the creation of this world there existed another world, the invisible and intellectual world equivalent to Plato's world of forms. Afterwards this world was made as a "school and training place where the souls of men should be taught and a home for beings destined to be born and to die."[19]

[1] Not to be confused with Caesarea the seaport in Palestine.